A family outing in Hong Kong


Hong Kong is a great city and though allowed to operate as an independent country, it is a Special Administrative Region (SAR) and for official purposes a part of China. There’s plenty to see and we all enjoyed the trip says Chandragupta Amritkar. A few not to be missed tourism places and experiences.

Big Bus: As always the best 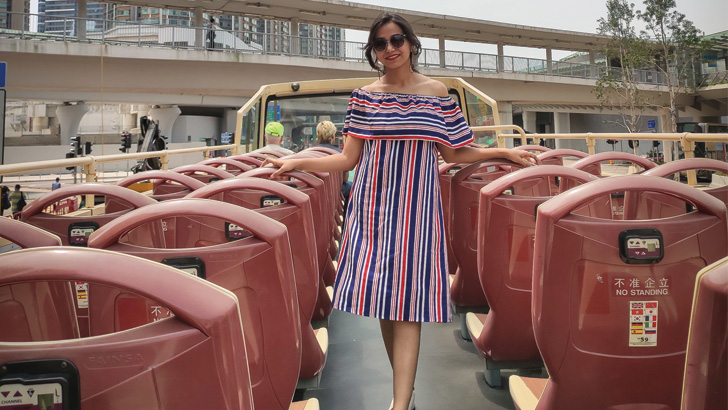 Having traversed across the globe (46 countries – 800 + hotels) I have always felt the Hop-on, Hop-off buses ideal to explore the city as they give you the freedom to plan what you want to see and for how long. The buses are wifi enabled with pre-recorded commentary available in 10 languages. Even if you are on a business trip with limited leisure time this is a good option. I got in touch with Vicky Leung, Marketing Executive, Big Bus, Hong Kong who was kind enough to provide the best tickets - Deluxe 2-day tickets.

The same afternoon of reaching Hong Kong we proceeded from Kerry hotel to Big Bus Tours Information Centre at Tsim Sha Tsui. Our ticket included all three different routes, a Night Tour, Star Ferry return ticket, walking tour, Sampan ride, and visit to the Peak. We took the ferry from Tsim Sha Tsui - a journey across Victoria Harbour on the iconic Star Ferry that has been linking Kowloon and Hong Kong Island since 1898. One has to experience the Star Ferry across Victoria Bay at least once. The views of both Kowloon and Hong Kong Island are incredible

Big Bus provides over 20 conveniently located bus stops covering most of Hong Kong tourist attractions. The three different routes include Blue Route, Green Route and Red Route with a frequency of 30-45 minutes. If you want to cover all the three routes you have to have a 3 day pass. 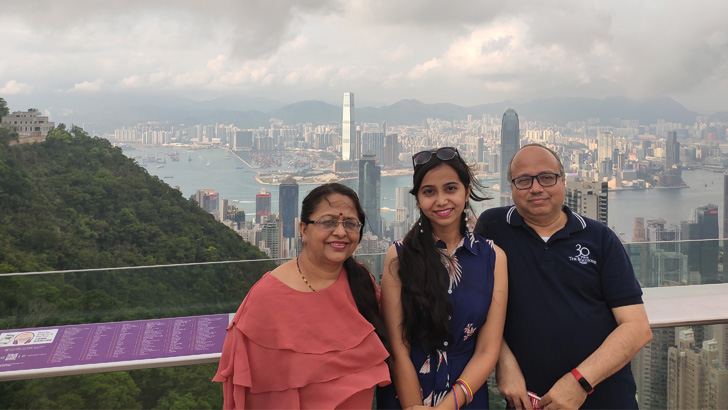 Our first stop on Big Bus was Victoria Peak. Soaring 1,811 feet above sea level, Victoria Peak is a must visit. The best way to start is with the 130-year-old historic red tram – a funicular railway to get up to Victoria Peak. There was a long queue for the tram but with Big Bus you get fast track entry to enter the Peak Tram and Peak Sky Terrace observation deck. The steep tram ride was great - a bit scary for a few – treating us to a visual experience.

The Peak Tower has lots of dining and retail outlets. Situated atop the highest point on Hong Kong Island, The Peak provides views of one of the world’s most spectacular cityscapes, skyscrapers as well as the city's beautiful blue waterways. The Sky Terrace 428, standing at 428 metres above sea level, is the highest viewing platform in Hong Kong offering a stunning 360-degree panoramic view across the Hong Kong. One sound advice - do check the weather forecast beforehand. 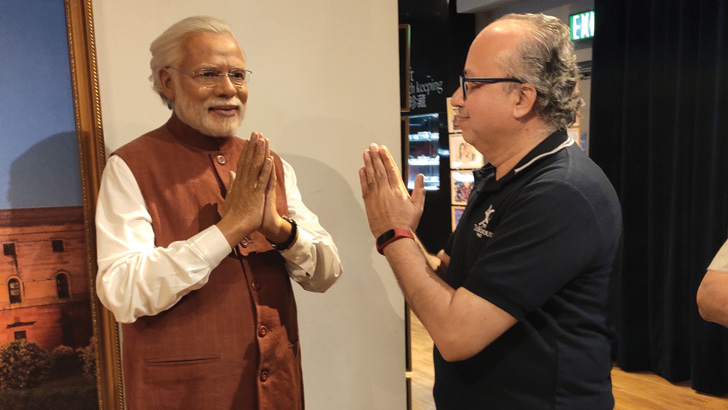 As I was planning the trip to The Peak, a visit to Madame Tussauds is a must. At Madame Tussauds one can get close and personal with celebrities, icons and historical leaders in a fully interactive experience.

The museum is divided into numerous sections. World Premiere is quite popular as it features a range of movie stars - Bollywood stars including Amitabh Bachchan, Varun Dhawan, Salman Khan etc and from Hollywood there were Audrey Hepburn, Marilyn Monroe, Brad Pitt, Johnny Depp etc.

Then there is the Art Gallery, a Fashion Zone, Hong Kong Glamour, Kung Fu Zone that is a tribute to martial arts with Bruce Lee, Jackie Chan and Michelle Yeoh, The Champions is for sports, Music Icons, Animated World which has Hello Kitty, The Hulk, Iron Man etc.

On an average keep at least a couple of hours to complete a visit of Madame Tussauds. There are plenty of photo opportunities so the time spent can increase. Infact there is a Selfie Gallery that was built for young adults (and also parents) and consists of two parts – silver color themed Cafe and pink color themed Ice Cream zone. 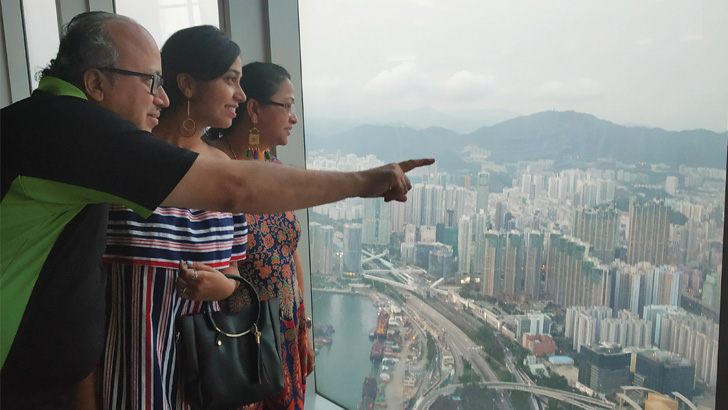 When I first met Josephine Lam, vice-chairman, sky100 Hong Kong Observation Deck, six years back in India I was impressed by her dynamism and keenness to promote sky100. I decided to make it a point to include sky100 in my Hong Kong feature whenever I planned. Six years later co-ordinating with Stella Wong, GM of sky100 and Ellen Wong, Associate Director, Marketing, sky100, I visited this amazing deck. Stella Wong suggested if you are coming with wife evening would be the best time. And how right she was.

Arriving in the evening the charming and extremely knowledgeable Ellen Wong was there to receive us. "Most major cities around the world have their own iconic observation decks and now Hong Kong has one,” said Ellen Wong. Developed by Sun Hung Kai Properties, sky100 is on the 100th floor of International Commerce Centre - the tallest building in Hong Kong. At 393 meters above sea level, it is the only indoor observation deck with 360-degree views of the city and Victoria Harbour.

Ellen Wong took us on Hong Kong’s fastest double-deck high-speed elevators, which reached the 100th floor in just 60 seconds. Entering it we were fascinated by the views. I was impressed by the 28-metre-long multimedia story wall, showcasing 100 fascinating local tales and anecdotes. The interactive sky100 mobile app also was superb. It provides an amazing experience of augmented reality (AR) where you can take pictures of paragliding above the world-famous Victoria Harbour or alongside the International Commerce Centre (ICC). As my wife’s birthday was a few days later Ellen Wong created an image of all of us standing alongside ICC.

We also saw witnessed “Love is in the Sky” light show, featuring dreamlike 3D images with unique projection technology and music. If you are hungry there is Café 100 by The Ritz-Carlton. 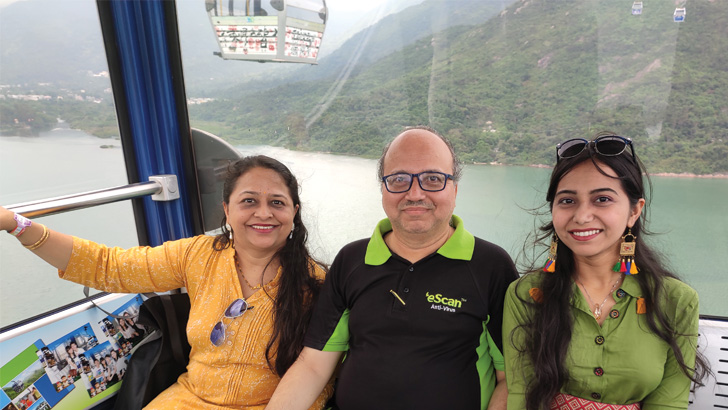 I met Angela Sue, Manager, Sales & Distribution, Overseas & MICE, Ngong Ping 360 at ITB Berlin and she is quite bullish on the Indian market having visited India several times. She was more than happy to welcome us.

Leaving Kerry hotel early we reached the Ngong Ping Cable Car station. The crowds had already began queuing (and I would advise you to book tickets in advance) but as we were in VIP category we got the tickets immediately and moved on through a special lane. We took the crystal car that has a glass-bottom. Ngong Ping Cable Car connects downtown Tung Chung and Ngong Ping on Lantau Island. The 30 minutes ride covering a distance of 5.7km in length (longest bi-cable ropeway in Asia) provides the breathtaking panorama of the Hong Kong Airport, verdant, mountainous terrain of Lantau Island, the Big Buddha and the 360-degree view of Ngong Ping Plateau.

Arriving at Ngong Ping Village and after a photo at the selfie point, we walked through a series of cafes and tourist shops including an Indian restaurant - Ebeneeezer’s, one of Hong Kong’s well-known eateries. Ngong Ping Village is a culturally themed village designed and landscaped to integrate into the scenic nature of Ngong Ping. On top of shopping, dining and entertainment, this “must-see” Hong Kong attraction also boasts three themed attractions – “VR 360”, “Motion 360” and “Walking with Buddha”. All of us enjoyed the three attractions. Apart from this one should visit the Big Buddha (At 34-meters literally dominates the Lantau Island), Po Lin Monastery and Tai O fishing village. 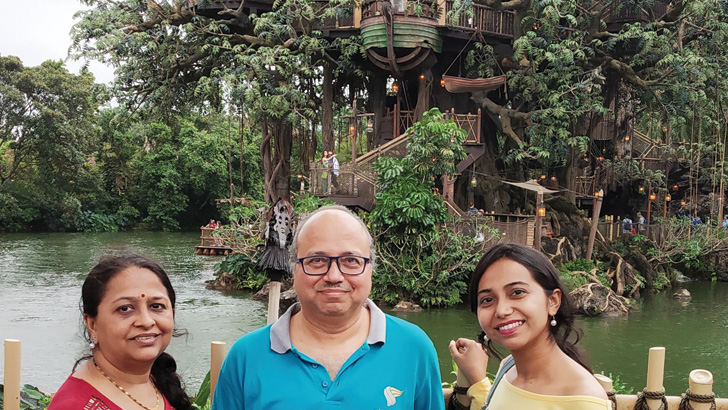 Hong Kong Disneyland was on the top list of my daughter. My first point of contact was the dynamic John Sinke, Director, Marketing, Hong Kong Disneyland who has been systematically promoting the destination with regular updates on LinkedIn. He in turn connected me to their media consultant, Shuk Wa Tsang.

This was our last tour and it was the only day when we had to face the rains. Arriving into Hong Kong Disneyland at noon we were surprised to see crowds in spite of rains. There is something so magical about any Disneyland and its official tagline is "The Happiest Place On Earth" which is true.

There are several fun and themed rides and amazing live musicals for both kids and adults. Though we were there till late evening we would not even finish everything – though rain did hamper our visit – ideally visit least for a full day.

The park starts with Main Street that is full of shops and restaurants and we stopped on the way for souvenirs and photos. The Disneyland is split into Tomorrowland, Fantasyland, Adventureland, Grizzly Gulch, Mystic Point and Toy Story Land. The sad part was there were long queues most places.

One should not miss the Iron Man Experience, Hyperspace Mountain, Jungle River Cruise, Toy Story Land, Rafts to Tarzan's Treehouse, Mickey and the Wondrous Book. The Festival of The Lion King show was the last we attended and one of the best – worth the long wait. My daughter enjoyed the parades with Disney characters.

This is one place that my wife and daughter just simply loved and were reluctant to leave. Seeing the crowds – local and International Ladies Market for sure is Hong Kong's most popular market. Stretching more than a kilometer and with over 100 stalls of modern and traditional dresses, hand bags, watches, cosmetics, bags, home furnishings, CDs, trinkets accessories for women of all ages and souvenirs, the Ladies’ Market is a shopping paradise. It’s a great place to bargain and sellers expect you to bargain. Do look out as the market is flooded with fakes or copies.

Due to time constraints we missed out on Ocean Park Hong Kong. Over all it was a great trip and the Hong Kong people were too kind everywhere. 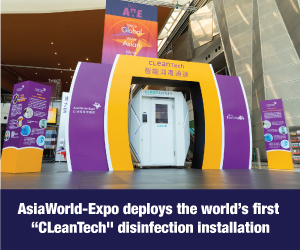